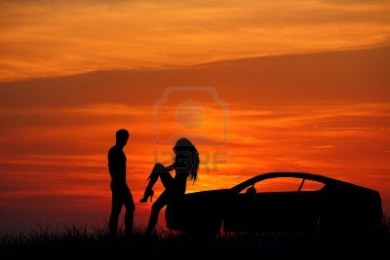 Ranti smiles as she walks towards her reserved seat in the restaurant. She knows her looks always turns heads. Standing at a whopping three feet eight inches, with hair so thick and rich it is always mistaken for a Brazilian weave-on,and her voluptuous, perfectly rounded ears; she is the type of woman every man leaves his wife for.

She takes her reserved seat in the VVVVVVIP section and waits for her fiancé, Akinbehinje, to arrive. It is Valentine’s Day: the holiday of the women, created by the women, for women, to never perish from any calendar regardless of socio-economic climate.

A few minutes pass. Restless, Ranti glances into her custom fitted Prada bag, struggling in agony to decide which of her phones — gifts from her many admirers — she should pull out to confirm the time.  She eventually settles on her z60. With a few manicured swipes, strokes and caresses, her device promptly responds with a subservient, butler-like British accent, “9:30pm madam”. Akinbehinje isn’t due to arrive until 10. There is a moment of sudden, sheer panic in Ranti as the head waiter approaches her table, but he makes a detour and relief washes over her in a an awesome wave as the owner of the restaurant approaches the table. She accepts his pandering with a gracious smile while slowly dragging on a fag and blowing out the blue plume towards the heavy ornate ceiling.

It is 9:45pm and the light drizzle does not faze Akinbehinje’s stroll towards the restaurant. He catches his reflection in the mirror and takes a moment to clean the lipstick on his chin and spray a whiff of his signature strong cologne to mask the scent Kelechi’s sweet nectar had enveloped him in during their extensive tryst. His Nokia rings and he answers immediately.

“Collins! I hope you have some good news abeg!”

Sigh. “Okay. That will work. The heavy sea traffic is typical of the season. But please no later than midnight abeg.”

Akinbehinje sighs again as he hangs up his phone. This year’s valentine is proving more hectic than prior ones. Last year, he only needed twenty seven freight cargo containers filled with designer perfumes, handbags, vanity mirrors, vanity toilet paper and Brazilian hair, but for this year, he needs fifty seven. Still, it is a lot cheaper and more fruitful than trying to engage 9ja babes in actual conversations about anything NOT involving Prada, phones or hair. He smiles at the memory of how, in his naivete, he once tried to grow and mature in love, truth and simplicity together in this existential miracle called life with a 9ja woman. He tries to hold on to the memory but it is overpowered by the more vivid memory of his recent tryst with French connection Clementine, the girl he was with a few hours before Kelechi. The absurdity of his earlier strategies in the warzone called love makes him smile. As he approaches the restaurant, his languid pace comes to a complete stop. The cigarette he flips away makes a thin orange arc during its wet journey towards a tiny puddle. The pedestrians that stop to gape at him barely register in his mind as he jogs rapidly in one spot. After a few minutes, he is sweating profusely. He then dashes into the restaurant.

Ranti smiles as her fiancé races into the restaurant. Her iphone 29 insists that the time is 9:58.

“Gbenga! Baby you were almost late!”

Akinbehinje pants as he flags down the owner of the restaurant.

“I’m sorry my love. Traffic was insane on Adeniyi Jones so I left our Buggatti on the road.”

Ranti gasps. Her almond shaped eyes moisten. “You left your car to get to me?”

Akinbehinje, still panting, looks her dead in the eyes. “Baby, the sun rises and sets with you.”

This is my handsome guest blogger; His name (as I have said above) is Emeka Nweze and all I will tell you for now is that he is going to be the major contributor to our soon-to-fly erotica category, right on this here blog. He is a fantastic writer with a quirky, crazy mind, and never scared. So prepare to be blown away and prepare to be . . . titillated. Yes, I love that word.  From me to you, HAPPY VALENTINE’S DAY whatever that means to you.

I love you all.

6 thoughts on “OUR VALENTINE OFFERING; THE ECSTASY OF IGNORANCE BY EMEKA NWEZE”

Pearl Osibu is a graduate of Agric Economics who is afraid of soil and animals. She cannot save money to save her life! A fashion designer who can be caught looking most unfashionable most times; a dreadlocked Rasta who has never smoked hemp; a writer when the Muses are kind, and an all-round troublemaker on social media. Her desires are simple—to live happy and die pretty. The former is achievable, the latter hardly likely. She lives and works in Lagos. She plans to buy a power-bike soon though she wonders if she has not outgrown this. She will travel the world when she can afford to and until then, will tamp down on her wanderlust. She says: "Be kind to someone today. Do someone a good turn and expect nothing in return."